For the longest time, Fastcast4u has been used as a dashboard for clients to manage their radio stations. Currently, we are looking to replace that with EverestCast. It has a better and simpler interface than Centova Cast.

We will outline below some of the main differences between Centova and Everestcast.

Right off the bat one of the key differences in the graphical interface that Everestcast uses vs Centova.

Everestcast presents the listener statistics, tracks that have played and currently playing as well as the channels in the radio station. This makes it easy to your stations statistics as well as quickly switch a channel on/off. It also allows you to quickly switch a server on/off as well as edit details of the current server and access your Shoutcast details. 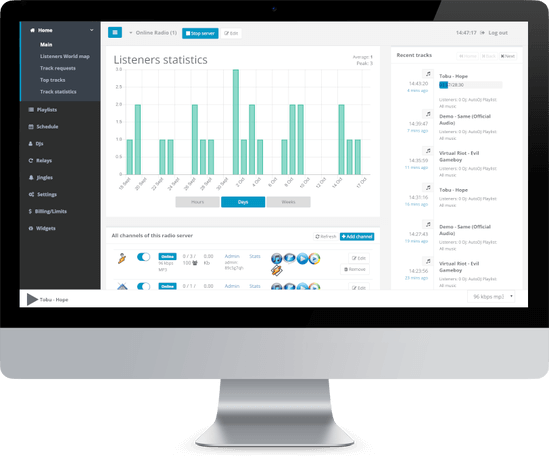 With Centova -- to access the statistics, edit your station details, as well as access your SHOUTcast details -- you would need to enter different areas.

There is no need for a General Rotation playlist in order to start your server with Everestcast. You can also tag your mp3 files from within Everestcast, something that isn’t possible with Centova. However, unlike Centova, there is no Immediate, Scheduled, General Rotation, or Interval playlists any longer.

Everestcast also allows you to easily set up schedules for your playlists as well.

Instead of using Interval playlists for station IDs or commercial breaks, Everestcast uses Jingles to manage them. This allows you to easily manage them as well as schedule them.

Just like with Centova, Everestcast automatically shuts off when it detects a live connection to it. However, you need to create a DJ account with Everestcast to connect. Everestcast currently does not have scheduling available like in Centova. This means that anyone can connect to it at any time. You can, however, set which DJ has priority to connect live.

Was this answer helpful?